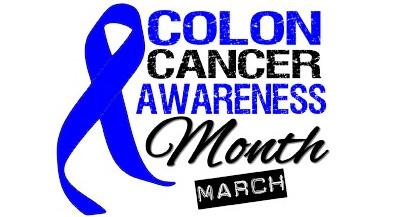 Since 2000, March has been designated Colorectal Cancer Awareness Month.  Colorectal cancer is the fourth most common cancer in the United States, and the second most deadly, according to Healthfinder.gov. It is most often found in people age 50 and over, and it usually develops and spreads slowly over several years.

Colorectal cancer most commonly begins with the development of a non-cancerous polyp (tumor) on the inner lining of the colon or rectum.  Some types of polyps are more likely to become cancer than others.  If the polyp does become cancerous, it spreads into the outer linings of the wall.  If it gets picked up by the blood or lymph vessels, it can spread to other parts of the body, like the liver.  This process is called metastasis.

By far, the most common (about 95%) type of cancer found in the colon or rectum is adenocarcinoma, though there are a few other types (carcinoid tumors, gastrointestinal stromal tumors, lymphomas, and sarcomas) that do occasionally occur in these regions.

The most common treatments for colorectal cancer are surgery, radiation, chemotherapy, and targeted therapy.  For severe cases, ablation or embolization may be utilized.  Depending on how advanced it is, more than one of these treatments may be used, either at the same time or consecutively.

The good news is that it does develop slowly, so with regular screenings, it can be diagnosed early and treated more easily, or even prevented altogether if the polyp is discovered and removed before it has a chance to become cancerous.

There are several different ways to screen for colorectal cancer:

If a person gets regular screenings starting at age 50, it is possible that 6 out of 10 deaths due to colorectal cancer could be prevented.

For more information or to schedule an appointment, contact Aspire Hospital today.